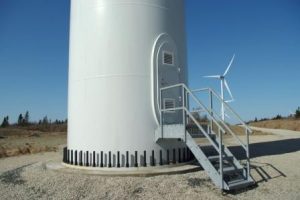 Wind turbines require a compact and high power transformer solution in order to provide the maximum output with the smallest weight. In the past most wind turbines which had on board transformers utilised cast resin technology. However, increases in power ratings and higher voltages have meant that cast resin is no longer always suitable. In addition, the reliability of cast resin transformers has been called into question with a number of high profile failures in the field.

A new fluid filled solution was needed for wind turbines and CG Power set about developing a compact transformer, in partnership with DuPont, with the aim of fitting it through the tower door on a modern multi-megawatt turbine. This transformer became dubbed the SLIM. For the first range of SLIM transformers Pauwels used silicone oil, as it is K-class fluid with good high temperature characteristics. However, silicone oil has serious shortcomings in its poor biodegradability and tendency to leak through gasket seals.

Due to these problems CG Power went in search of a more environmentally friendly solution and this is where MIDEL 7131 fitted in. Since MIDEL 7131 is readily biodegradable it has far less impact on the environment than non-biodegradable silicone oil if it is spilled. It is also more compatible with most sealing materials and so less likely to leak. In the wind turbine world both these attributes are beneficial since many of the turbines will be located in environmentally sensitive areas, or offshore.

CG Power used MIDEL 7131 to great effect in the next generation of their SLIM transformers, naming them Bio-SLIM. M&I Materials collaborated extensively with CG Power and DuPont in the development of the Bio-SLIM, providing laboratory testing for materials compatibility and long term high temperature testing of MIDEL 7131. M&I Materials also worked to develop the market for a fluid filled wind turbine transformer, an arena previously dominated by cast resin.

In the second round of development the Bio-SLIM transformers were designed to have a smaller footprint than the silicone designs, yet with the same or higher power output. This was possible due to the superior thermal and electrical properties of MIDEL 7131, when compared to silicone oil.

There are several thousand Bio-SLIM transformers now in operation around the world. The latest transformers in the Bio-SLIM range have ratings up to 7MVA and highest voltages to 72.5kV.