MIDEL goes global in the 1970s

“It is anticipated that programmes to replace toxic or inflammable dielectric fluids in overseas countries will follow the example of the UK.”
– FB Waddington, “New Dielectric Fluids for Power Engineering Applications”, 1979

In a technical paper from the late 1970s authored by FB Waddington (M&I Materials scientist and one of the inventors of MIDEL), he identifies some of the first uses of MIDEL 7131. In the paper, Mr. Waddington points out the following:

“The requirement for improved synthetic electrical insulating fluid was foreseen in the late 1960s as the harmful ecological effect of certain halogenated compounds being used as dielectric fluids, on the world’s delicately balanced environment, became apparent. Also, as the fire and explosion hazards of petroleum-based fluids became less acceptable to a more safety-conscious generation, safer alternatives are being sought.

“However, the real spur to the final development and commercialization of these synthetic fluids came from the challenge to meet the exacting specifications of transformer manufacturers’ customers. For example, the Central Electricity Generating Board (CEGB) in the UK required a dielectric fluid to replace Pyrochlor in certain transformers and associated equipment, which would function without any downgrading or modification to the units. The American railroad system (AMTRAK) required a fluid to act as a transformer coolant to replace the American silicone oil which has failed as a replacement for Askarels, and the French lralec fluid which, though technically satisfactory, was not acceptable as it was still a halogenated fluid.

“Lucas Aerospace in the UK required a non-toxic capacitor fluid to replace Askarel, again to meet all specifications as to high permittivity and low flammability obtainable with Askarels in a capacitor.

“Typical of applications in the UK is a 7 MVA CEGB trailer-mounted rectifier transformer which was retrofilled with MIDEL 7131 in 1979. MIDEL was the only fluid capable of meeting the stringent specification for this unit, requiring no downrating, high-voltage breakdown strength and good lubrication for the pumped cooling system involved. 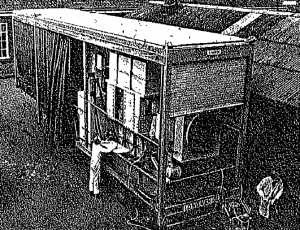 “MIDEL 7131 has been adopted by AMTRAK and SEPTA Railroad systems for replacing PCBs in their on-board transformers, on a considerable number of Metroliner passenger locomotives and several G60 freight locomotives.

“Transformer retrofilling programmes with MIDEL 7131 are in hand with Ontario Hydro in Mississauga and Quebec Hydro in Perth, Ontario.”